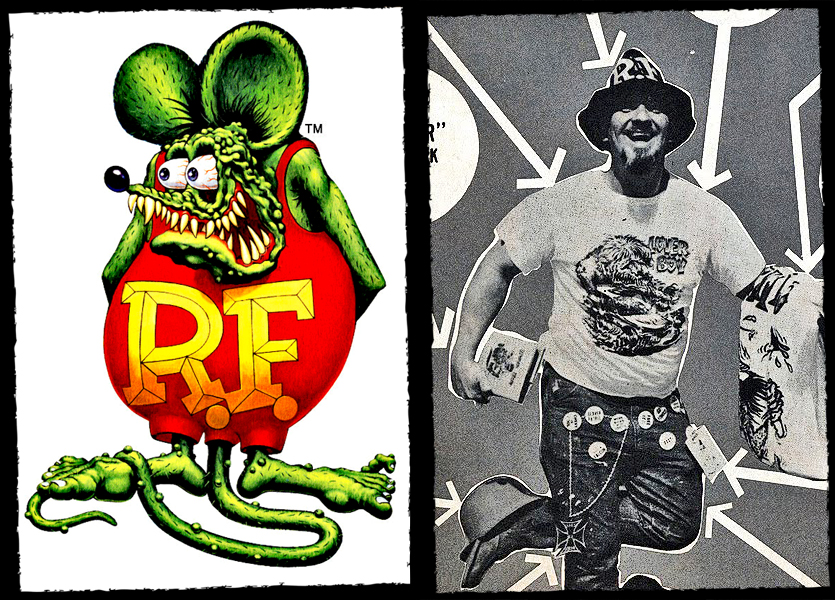 Rat Fink! This big ol' bug-eyed, gnarly-toothed, green monster was created by Ed "Big Daddy" Roth because of his distaste for that wholesome, do-good rodent - Mickey Mouse. Rat Fink was the anti-Mickey Mouse, Walt Disney's worst nightmare - a character who embraced being different and personified weird. Ed Roth was an artist, pinstriper & custom car builder who stood as one of the fathers of the Kustom Kulture movement which grew in popularity during the 1950s & 1960s. He set up booths at car shows, drag races, fairs, etc, and airbrushed hot rod drivin' monsters onto t-shirts which attracted lines of customers. It wasn't long until Rat Fink stood out as his most popular character, and, soon, kids and adults, alike, could find Rat Fink on emblazoned on anything and everything from t-shirts to model cars, from gumball machine toys to halloween costumes, from comic books to record albums (really. Look up "Mr. Gasser & the Weirdos)! We salute Ed Roth & his buddy, Rat Fink, for demonstrating that being weird isn't just okay, but it's cool!
Embrace your inner weird with some of our new Rat Fink items!
Here are a few of my personal favorites:
0 comments
Share this article
Newer post
Older post
Back to blog